The Northwest Straits Foundation, Island County Marine Resources Committee, and Naval Air Station Whidbey are partners in an effort to remove shoreline armor from the base of the feeder bluff located between Maylor Point and Forbes Point in Oak Harbor. This project is funded with grants from the National Estuary Program through the Habitat Strategic Initiative as well as the US Fish and Wildlife Service’s Puget Sound Coastal Program and Washington State Salmon Recovery Funding Board.

The project was identified through an assessment of opportunities to restore feeder bluff processes and functions in Island and Jefferson counties funded by the Estuary Salmon Restoration Program. Work on the project also continued with funding through the Marine and Nearshore Grant Program (EPA/WDFW/DNR).

In 1978, the US Army Corps installed a variety of hard armor as a ‘Low Cost Shore Protection’ experiment along a feeder bluff on Whidbey Island. Most of this armoring failed in a storm in 1979; only timber posts and tires remain. These, along with concrete and other debris, interrupt the transport of natural sediment and cover valuable habitat along 1,500 ft of shoreline.

This project will restore feeder bluff processes and uncover 38,000 ft² of buried shoreline habitat by removing:

Link here for more facts and details about the project.

Monitoring of the site for biological and physical changes will continue for at least five years post-construction as funding allows through our partnership with WDFW. Forage fish spawning surveys conducted by US Navy personnel have detected surf smelt eggs within the restored area since shortly after project completion. 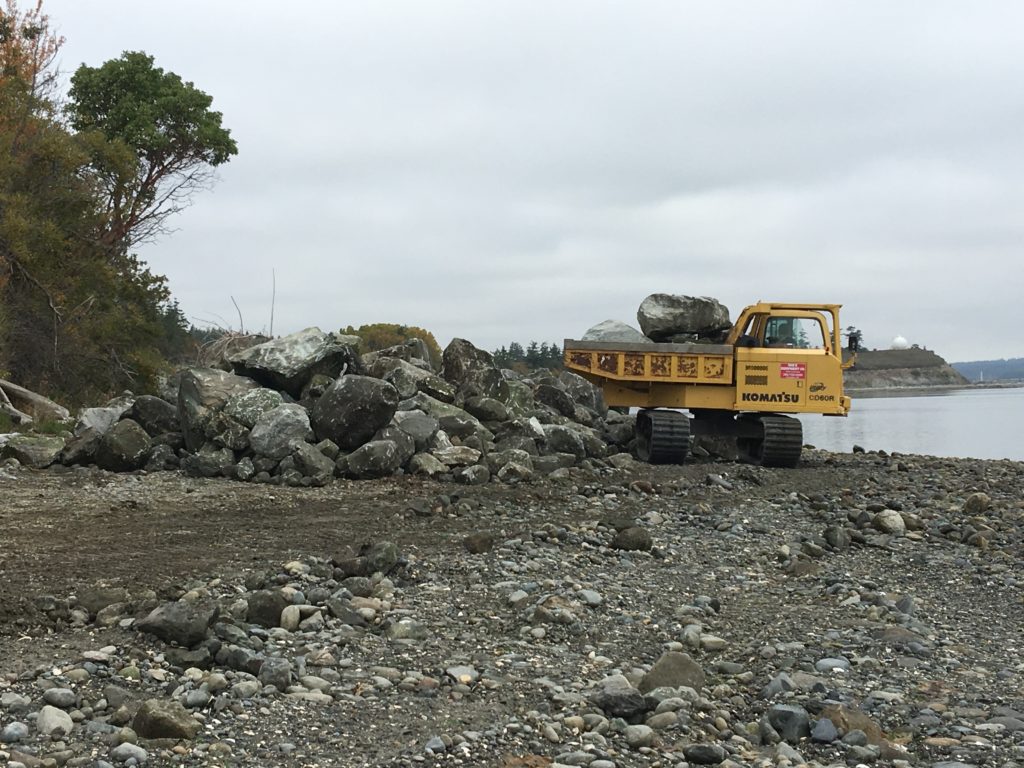 This project has been funded wholly or in part by the United States Environmental Protection Agency (EPA) under assistance agreement PC-011J22301 through the Washington Department of Fish and Wildlife (WDFW). The contents of this document do not necessarily reflect the views and policies of the EPA or WDFW, nor does mention of trade names or commercial products constitute endorsement or recommendation for use.